Nõo Lihatööstus launched a healthy product line for young people in order to combat excess weight and turn more attention to a balanced diet. The company plans to extend this product concept to other countries as well.

Product developers of Nõo Lihatööstus in cooperation with researchers from the University of Tartu developed a new product line in order to alleviate the problem of excess weight and promote healthy food consumption among young people. Nõo's initiative was also joined by the Estonian School Food Association and several upper secondary schools. The result was approved by the young people who were involved from the beginning.

Statistics show the sad fact that almost half of all deaths are due to lifestyle-related health risks. One in four deaths is caused by nutritional risks, which in turn manifest themselves as diabetes, vascular and joint diseases. In numbers, the damage arising from problems caused by poor nutrition has already surpassed the damage caused by consumption of tobacco and alcohol, or lack of exercise,” commented Arthur Taavet, project manager of Nõo Lihatööstus. “There are two times more overweight adults than there were at the turn of the century. One in three young people is overweight. Unfortunately, 90% of young overweight people will remain overweight as adults, because it is much more difficult for them to change their eating habits later. The physical activity covers only 5% of the problem, so the factor at the centre of it is actually the wrong diet. The outlook is catastrophic and clear, which is why we want to change the trend decisively.”

Nõo Lihatööstus, together with young people themselves, thoroughly mapped out the options that exist within reach of the younger consumer community, as well as the consumption habits, wishes and preferences of this group. “We interviewed young people, showed opportunities, experimented, constantly tried different things, and conducted research regarding a reasonable price range. We discovered that only energy drink producers pay special attention to the 12-24 age group. And we learned from this knowledge,” said Taavet. “We figured out that the focus should be on the high meat content of the products, and that they must be made in an environmentally friendly way. To a lesser extent, we also considered the size of the package.”

There are four products in the series, including meat strips, wavy ham slices and chicken snack sausages with Parmigiano-Reggiano cheese.

Taavet added that the final packaging design was also completed in cooperation with the University of Tartu, with whom eye-tracking tests and measurements were performed. “Unfortunately, young people have a misconception that meat is not healthy,” he admitted. “At the same time, the Estonian School Food Association says that young people experience insufficient meat consumption and protein intake. There is, of course, an explanation for this: when you look at the products that are bought in stores the most, unfortunately, they do not have the highest meat content and may not be the healthiest ones. With our products we want to contribute to a wholesome food selection.”

“In the course of product development, all major retail chains told us that unfortunately so far such a healthy range of products for young people has simply not been available in the market”, described Simmo Kruustük, Chairman of the Supervisory Board of Nõo Lihatööstus. “Most importantly, young people themselves have praised the product range and its taste, and the association responsible for the quality of school food expressed its appreciation that we have chosen such healthy approach.” 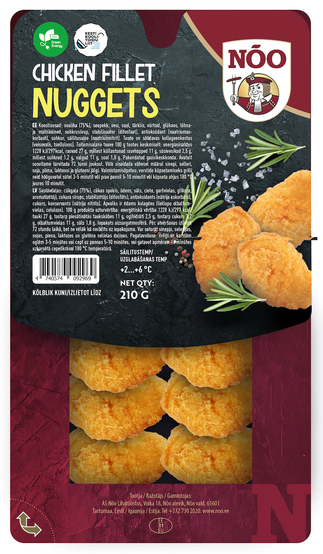 The product line was developed within the framework of the Design Master Class program of Enterprise Estonia (EAS).

Nõo Lihatööstus is the largest and most innovative meat product company in Estonia based on domestic capital. Last year it was awarded the title of Family Business of the Year in a competition for the best Estonian companies organised by Enterprise Estonia, the Estonian Chamber of Commerce and Industry and the Estonian Employers' Confederation. Nõo Lihatööstus offers meat products that received more than 400 different awards. The company also pays special attention to high-quality product development.